New Book out: “Peter Pike and the Silver Shepherd,” #5 in the Peter Pike historical thriller series

Who let the dogs out?

He’s broken up with his fiancée Greta, is homeless and diagnosed with PTSD in the mid-Missouri town of Smithtown, home to the University of Missouri. The VA refers him to the Center for Humane Animal and Canine-Human Assimilation, Cha-Cha for short, which assigns him a silver German shepherd.

But who is this dog, really? Bubba is gentle but has strange reflexes around certain symbols. Who are the supersmart wild dogs terrorizing Smithton? What is the director of Cha-Cha hiding and why is she so knowledgeable about Nazis?

To find out, Pike must dive into the murky history of war dogs, space dogs and the Pet Holocaust to find out who let the dogs out and how long he has before they take over Smithton — and the world!

Available in paperback or on Kindle.

Neal W. Fandek is the author of the Peter Pike series:

All formats are available in paperback or on Kindle at https://tinyurl.com/2p9h954r

Coming later this year, look for “Peter Pike and the Wayward Wife (with the Missing Moonrock).” Fandek lives in the college town of Columbia, Missouri, with his wife, the artist Marilyn Cummins.

Peter Pike #5, “Peter Pike and the Silver Shepherd,” now available in paperback or on Kindle edition

“Peter Pike and the Revenge of the Romanovs”

“Peter Pike and the Revenge of the Romanovs” is based on a supposedly true account of the 1887 Third Imperial egg of the doomed Romanovs (pictured), a fabulous Faberge.

This egg comes with an extraordinary backstory: Bought in the 2000s for £8,000 by a scrap metal dealer in the Midwest who kept it in his kitchen for years until a Google search revealed that he had a lost treasure on his hands.

“In a post on its website, the Baden-Baden museum dismissed the story, declaring: “There is simply nothing to say, except, ‘What nonsense!’ ”

“The museum claimed that the Vacheron Constantin pocket watch concealed within the egg was produced “much later than 1887,” and that “similar cheap eggs were produced in the late 19th and early 20th centuries.”

See, that’s why you hire Pike.

Explore the strange and wonderful place that is St. Baarlam, Ill.

Buy the paperback or Kindle edition

Cahokia, home to approx. 20,000 and the largest city in the U.S. before Columbus 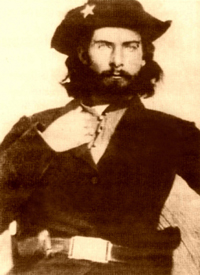 On the first bead, pray one Our Santa Muerte:

Our Santa Muerte who will come for us all, kind and gentle be your kiss. When you come to end my life, may I be free of any regrets. Thank you for this day, one more beautiful day, so I may have it to live, love, and laugh my own way, amen.

Glory be Holy Death, blessed death, peaceful death. As you have been with me from the beginning, so are you with me now, and so will you be with me always, amen.

Here now! The fourth in the Peter Pike series, “Peter Pike and the Sinister Saint.”

My list of the five best hard-boiled private eye novels. No. 1 you’ve heard of, hopefully seen the movie — the book is better!– but even pulp fiction fans may not have heard of No. 2. https://shepherd.com/best-books/hard-boiled-pis

Ah, the Beringia theory: That the Americas were populated by folks from Asia crossing the Bering Strait land bridge from Siberia to Alaska. Well, it is and always was a myth. Here’s the latest evidence they got here by sea. https://www.theguardian.com/science/2018/mar/28/footprints-sand-scientists-prehistoric-canada-british-columbia?utm_source=dlvr.it&utm_medium=twitter

Peter Pike and the Murderous Mormons by Neal W. Fandek